The World is actually becoming a better place

For many of us it’s been a challenging year. We’ve seen political turmoil, economic uncertainty and environmental instability and it's easy to feel depressed about the state of the world.

Yet what really happened? And where are we headed? As yogis we try to look at every situation with an open mind. And the facts are rather surprising – when we examine the actual data, many aspects of the world, from violence to poverty, health to energy production, are actually improving.

Knowing this might do more than make your heart feel lighter. It could help you feel more inspired to make a difference to the world.

It turns out that by historical standards our world is living through the most peaceful, healthy, safe and compassionate time in history. Not only that, neuroscience has shown that we have hard wiring that makes us more likely to interested in negative news - even when everything’s going well.

Of course, the world has enormous problems to solve. Current political trends, climate change, environmental challenges... all present us with vast difficulties - and opportunities to work together. Amidst all of these challenges, it's perhaps important to know that in many, many respects, the world has progressed further than we think.

How’s that for a New Year’s party jaw dropper??!!

Now you’re going to need some facts! Join Andrew Wells and Aja Krystall to have a look at them...

What about war and terrorism?

With this year’s acts of terror being a constant topic, it’s hard not to feel like there a shockingly high amount of violence and negativity in the world today. And there is! However, let’s look at the trends. In the first decade of the 2000s, the number of deaths per year had diminished by 94% from 1950s levels - even including the Iraq conflicts. Since 2010, the conflicts of the ‘Arab Spring’ have created great misery, but even so in 2016 violence was still down by 83% from 1950. And this was considerably lower than most of the last 60 years. [1, 2] So the world may appear may more violent, but in fact it isn’t. 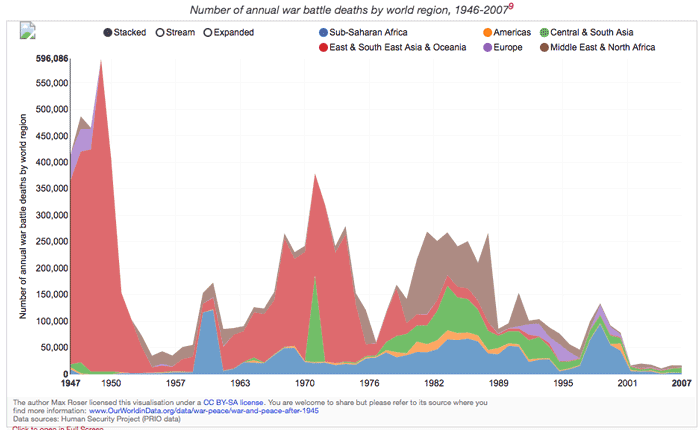 Most these deaths are in very specific regions of the world, leaving the rest of the world remarkably free from war-related casualties.

Of course, none of these statistics should dull our hearts to the vast suffering and needs of people caught up in these conflicts. There are more refugees in the world now than ever before. Yet perhaps the statistics above can give us evidence for hope - hope that in fact, we humans are making remarkable progress towards ending the scourge of war. 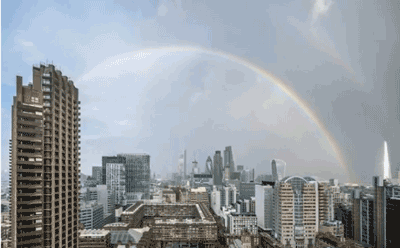 A rainbow appears over London after the London Bridge terror attack. [3] 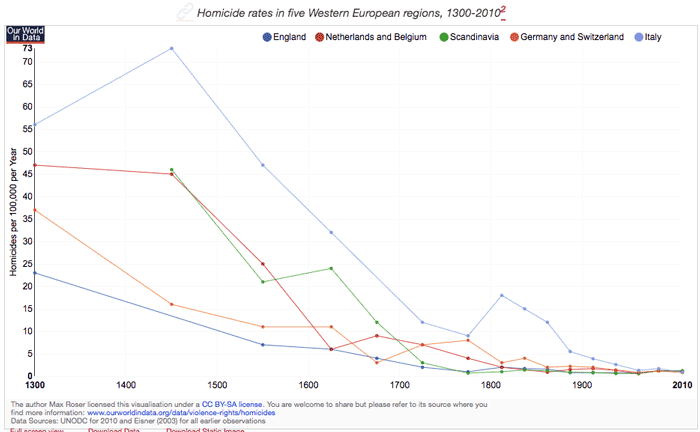 Overall, crime has decreased significantly since 1993, and plunged compared with decades before that. Even though crime and violence on television, games and other media has increased, in real life the murder rate is the lowest it has been since the 1950s. It is important to look back because we humans lose perspective and tend to romanticize the past, but forget how violent life truly was in, say, the Middle Ages, or even just a couple of hundred years ago. Have a look at this graph of the last 700 years! [4]

Surely we have a long way to go with poverty?

We all yearn to see a world free from images of our fellow humans in desperate poverty. We certainly aren’t there yet, but in fact we’re making incredible progress. 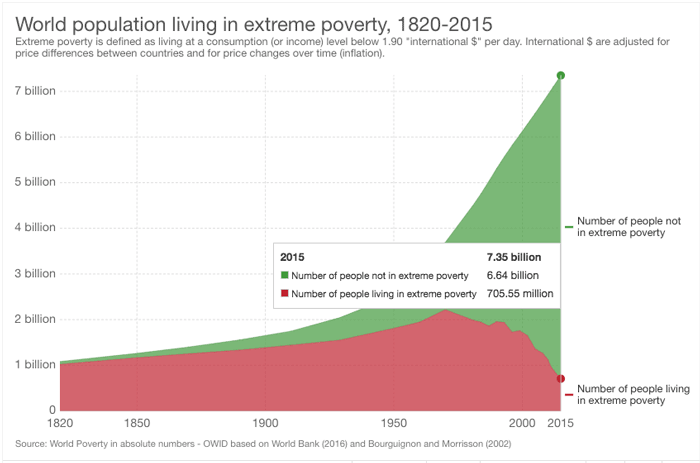 Since the 1990s, the number of people living in extreme poverty has halved. That’s a reduction of around 1 billion people!

World hunger has also declined by 40% since the 90s. Even the United Nations Millennium Development goals set in the 1990s were achieved 5 years ahead of schedule in 2010. [5]

Of course this is only the beginning.  We have had both the technology and resources to completely eradicate poverty for more than 20 years - it would cost less than the world’s global military spending. Yes, we have work to do - but as a planet we are showing that where we have the will, we now have the way. And gradually, we are making great strides along that way.

Malaria, a devastating disease that can be prevented with a simple pill or the use of a mosquito net, is now finally in decline. Between 2010 and 2015, new malaria cases fell by 21% globally. During this same period, malaria death rates fell by an estimated 29% globally and by 31% in the African Region.

And if you consider indicators of global health such as life expectancy and child mortality, you see an extraordinary transformation. [5] 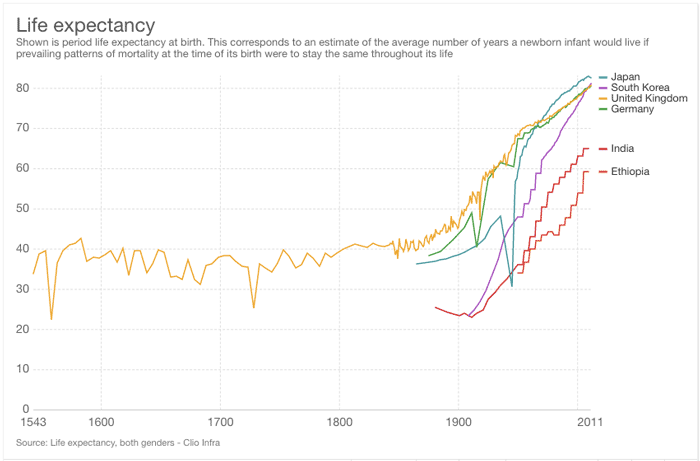 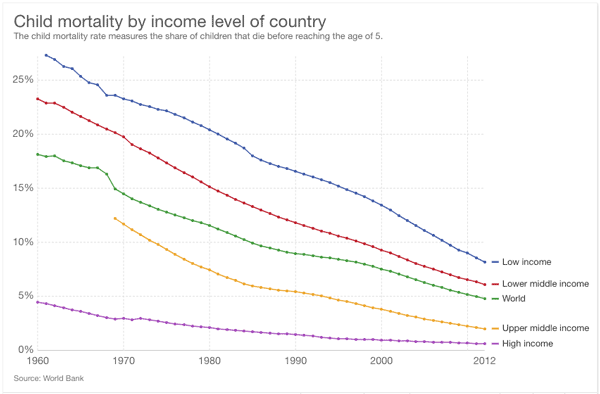 Why all the negative news then?

Neuroscientists are now pointing out that our brains are hard wired to be more interested in threats than the local good news. This hard wiring was a brilliant survival strategy on the plains of Africa, and our attention to drama  makes for superb sales at the news-stand when there’s some negative news to report. [6a]

But this may not be so helpful to our peace of mind now… and it may actually be hindering our society’s ability to make wise decisions. Why does Fake News go viral? Because people like to read it.

The solution? Be empowered in your thinking! [6b]

This is where meditation and mindful yoga practice give you a remarkable head start. When you connect to who you truly are, a wellspring of innate positivity makes you an awesome person to be with.

So, the world is actually becoming a better place and we’re just not noticing because we’re hard wired to look for threats?

Seems like this is indeed the case. Those key statistics above are only the beginning of the global picture of positivity.

While violence between humans is declining, so is violence between human and non-human animals. Whether it be because of environmental reasons or to avoid animal cruelty, the number of vegetarians and vegans around the world is steadily increasing every year. In 2014, it was estimated that there are 375,000,000 vegetarians worldwide! In Britain there were over half a million vegans, and since last year vegan food sales have increased by 1500%. Also, the fast food conglomerate McDonalds has seen a decrease in overall sales this past decade, with more and more customers becoming health conscious and choosing brands that offer fresher ingredients and more choice. Now we even have the MacVeg…

Teen pregnancy is at an all-time low (2% globally), even though when asked about the scale of the problem, people globally guess the figure is closer to 20%. Teen pregnancy is a good indicator of education, health and empowerment within adolescents. So a decrease in teen pregnancy is an interesting predictor that we are heading towards an ever-more empowered and educated population. [7]

Since 1995 worldwide gender inequality has decreased by over 20%. In a recent book called The Equality Effect, Danny Dorling uses data to show that the world is in fact slowly closing the inequality gap. Equality is increasing in more places than it is decreasing. He shows that in countries where equality is greater, human beings are happier and healthier and there is less 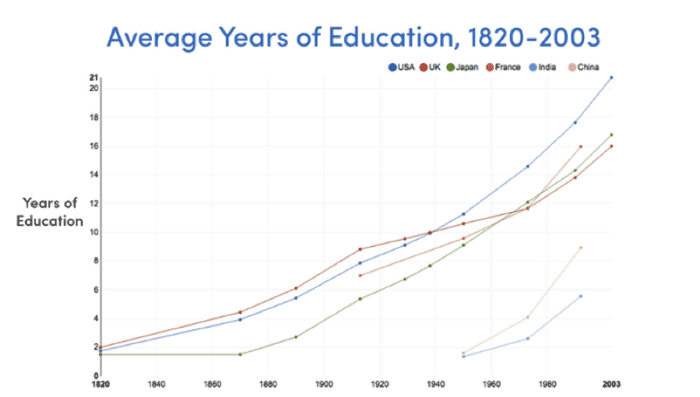 In the U.S. in 1820, the average person received less than 2 years of education. These days, it's closer to 21 years of education, a ten-fold improvement. Along those same lines, the extraordinary chart above shows how global literacy rates have increased from around 10% to close to 100% in the last 500 years.

And then, what about the environment?

Renewables now produce 22% of the world energy. In 2017 for the first time there were moments in the UK energy grid when more power was being generated by renewables than fossil fuels. And you may be amazed to know that the ozone layer is now making a recovery thanks to swift and decisive action by the world community in the 1990s.

It is true that we humans are impacting our planet on a massive scale and there is so much more we need to do. We have enormous challenges in the future. Climate change, plastics in the oceans, intensive farming for non-essential food production, and so many more issues play havoc with our global eco systems.

Yet even amidst these daunting odds, humanity is coming together as never before. Keep in mind that governments hadn’t ever met as one on the environment until as recently as 1992. Since that time, the world has made immense progress. It’s true that we need to do so much more. Yet in these last 25 years governments, corporations and citizen groups have come together over and over again in ways that would have been unthinkable even 30 years ago. In fact as we enter the 2020s, the environment is one of the key causes of human unity.

Some of the Dru team were present at Rio when all of the world’s heads of state came together for their first group photograph in history. If you look closely, you might just see Andrew in the bottom right! [10]

Life is getting better

Martin Luther King wrote, ‘If we are to have peace on earth… our loyalties must transcend our race, our tribe, our class and our nation; and this means we must develop a world perspective. ‘

Let us take a little time to celebrate our successes! And then perhaps we’ll be better equipped to transcend the last hurdles to building a truly compassionate world.

So, as we enter the New Year, please remember that every one of us makes a difference.

We hope this article will inspire you to be the change you'd like to see in the world. Please continue to create waves of change in your community. Everything you do makes a difference.

We'll add to this list as we find helpful sources beyond the ones we've included above. Happy exploring!

Wake up the Ayurvedic way
10 ayurveda tips for healthy digestion
Live an ayurvedic lifestyle
How Your Digestion Works According to Your Dosha Profile
Overcoming the Obstacles to Meditation
Engineering people with yoga
True stories: Dru Yoga really helped my back pain
Prana and Pranayama
Yoga for REAL women (like you and me)
Becoming an Abundant Yogi - part 1
Balance in times of change - Part 2 - Moving into faith
Balance in Times of Change - Part 1 - The path of equanimity
Sun Sequence - doing it YOUR way
Three Dru Meditation tools for happiness
Fats and oils - the good, the bad and the ugly
END_OF_DOCUMENT_TOKEN_TO_BE_REPLACED